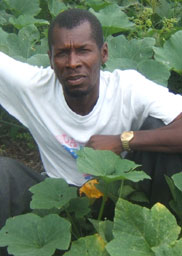 Abner Sauveur in the garden of the Matenwa Community Learning Center

According to Abner Sauveur, co-director of the Matènwa Community Learning Center on the island of LaGonave, off the coast of Haiti, poverty was the root cause of the deaths of 300,000 people in Haiti on January 12. Four important Haitian cities were flattened in an earthquake on that day.

In this interview, recorded July 12th, 2010, Sauveur talks about the January earthquake and how the people of La Gonave dealt with the disaster. He explains how the earthquake “struck” the whole of Haiti and not just the cities that have drawn media attention and aid.

Sauveur is in Moscow for two months to learn English so he can talk with English-speaking people about the work he does, find collaborators, and drum up financial support for his home community where the arm of the mega-aid machine never quite seems to reach after disasters. He is involved in grassroots projects for sustainable food, education, human rights, and, of course, earthquake recovery.

This is the first of several interviews with Sauveur conducted by Nancy Casey, the host of the Words and Music show on KRFP. Casey translates from the Haitian Creole. The programs include some Haitian music.

Other programs in the series: